This is such a good plant that in 2001 it became the first ornamental grass to be named “Perennial Plant of the Year.” 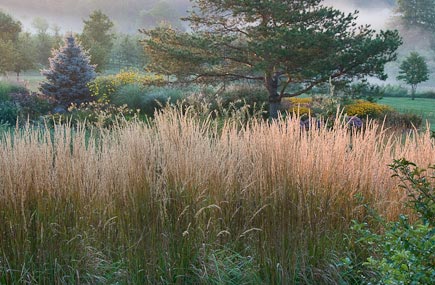 A stand of Karl Foerster grass in my garden, grown from divisions
Photo: © Y.Cunnington

K.F. grass, as I like to call it for simplicity’s sake, is named for German nurseryman, Karl Foerster, one of the big names in the renaissance of ornamental grasses in gardens.

Foerster introduced this plant, thought to be a natural hybrid of Calamagrostis epigejos and Calamagrostis arundinacea, to the nursery trade in 1950. Originally, he found it growing in the Hamburg Botanical Garden. This hybrid is sterile, so it will not become a troublesome self-seeder, or at all invasive in your garden. 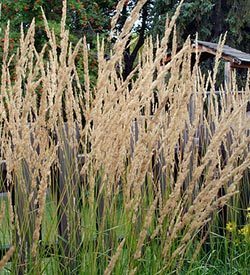 Flowers appear in June – earlier than many other ornamental grasses.

At first, they are loose, feathery and pinkish in color, then, through the summer, they gradually turn a wheaten color that lasts through the fall.

The flower stems grow bolt upright and stand up well through the season and over the winter.

Like most ornamental grasses, Karl Foerster feather reed grass is easy care. K.F. grass is hardy from Zone 4 to 9. 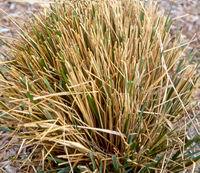 K.F. grass grows out from the center, and after a few years, you may see a hole-in-the-donut effect.

When this happens, dig it up and divide it in spring.

Replant vigorous divisions from the outer sections. Or leave a section in the ground and dig up and divide the rest of the plant.)

I divided a couple of large mature clumps one spring and managed to get more than a dozen new plants from it, which allowed me to plant a dramatic swath on the hill at the front of our house very inexpensively (as seen in the pictures here). In larger spaces, Karl Foerster grass is a natural for mass planting.

It’s also makes a fast-growing screen to use near swimming pool fences, or even as in informal hedge.

Good spring companions are flowering bulbs such as daffodils and tulips.

In the later season, this grass mixes well with mid-summer and late-flowering perennials such as coreopsis, coneflowers, liatris, Joe-Pye weed and rudbeckia.

Besides the upright habit – which makes it a very architectural plant – another attractive feature is how it moves gracefully in a breeze.

In a small garden, a clump or two can serve as a good accent plant, especially if surrounded with lower-growing companions. The narrow growth habit makes it a good fit for tight spaces.

Karl Foerster’s feather reed grass:
a note about the name

Back to Ornamental Grasses