Fall flowers – a lot of gardeners seem to miss out on them. As August comes to the perennial garden, they’re ready to throw in the towel.

It’s a shame: for northern gardeners the growing season is short enough, so why not extend the flower show well into fall with some lovely late-bloomers and ornamental grasses?

Perennials and grasses star in the late season

I’m enchanted with the autumnal look pioneered by garden designers Wolfgang Oehme and James van Sweden in the United States, and Piet Oudolf, in Holland.

I’ve designed my own garden to be at its peak in late summer because I adore fall flowers and the ornamental grasses that look so good with them.

For the most part, plants that bloom in late summer and fall are tough, drought tolerant and many of them grow tall and dramatic.

Another interesting thing about many of these fall flowers is how many of them are North American natives, which probably accounts for their toughness: they shrug off the drought, heat and humidity of our summers because that’s the very climate that shaped their evolution.

With their clouds of daisy-like flowers in pink, rosy-lilac or deep purple, asters are classic fall flowers. Robust and hardy, many garden hybrids stem from the native New England and New York asters.

Asters thrive in full sun in moist, rich soil, but can look a little weedy during the growing season, so tuck them in among other earlier-flowering perennials. In late June, pinch or prune stems back by half to prevent floppiness and stake taller varieties. Keep asters vigorous by dividing in spring every two or three years.

Some of the older varieties were plagued by mildew, but newer ones are resistant: look for Aster laevis ‘Bluebird’, with single violet blue flowers, Aster lateriflorus ‘Prince’, which has unusual dusky plum-purple foliage and tiny white star-like flowers with a raspberry colored eye, and Aster oblongifolius ‘October Skies’, which has blue flowers in September to October.

Another plant I wouldn’t be without has the unfortunate common name, Joe Pye weed.

But this North American native is not the least weedy.

Its botanical name Eupatorium is much more gracious, just like the plant.

Tall (in the 4 to 5 foot range) and stately, it’s a real butterfly magnet for almost six weeks in late summer when its large heads of tiny, dusky pink flowers bloom.

A widely available cultivar is ‘Gateway’. For gardeners looking for more compact versions, a recent cultivar, ‘Phantom’, is supposed to grow only 3 feet tall.

This perennials makes a terrific accent plant and mixes well with other late season stars, such as Echinacea, Rudbeckia ‘Goldstrum’, Sedum ‘Autumn Joy’ or ‘Matrona’ and ornamental grasses.

About 3 to 4 feet tall, heleniums complement autumn’s palette of golds, crimsons and oranges. These late summer to fall flowers thrive in full sun in moist humus-rich soil. Regular moisture is important, so don’t let them dry out in summer. 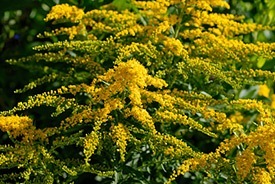 The is one of the new generation of goldenrods that I hope will help gardeners overcome the prejudice against these plants as mere roadside weeds.

Goldenrod is unfairly blamed for causing hay fever. Ragweed, which blooms at the same time, is the real culprit.

This late summer to fall flowering perennial thrives in full sun and well-drained soil and grows about 24 inches tall. Plants may need to be divided every 2 to 3 years to control growth. 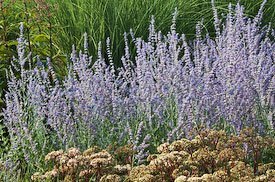 Russian sage blooms for many weeks in fall

Russian sage is a fall flower with a very long bloom time. The plant grows upright and has attractive lacy-looking greyish leaves that smell like sage.

This drought-tolerant perennial grows well in sunny, hot, dry sites. It is a good butterfly plant, and deer-resistant.

Grows about 3 feet tall and 24 to 30 inches wide. Don’t cut back in fall; wait until spring and then cut to 6 inches from the ground. More growing information on Russian sage. 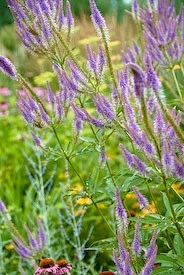 This is a lovely selection of a North American native wildflower. Growing tall – about 4 to 5 feet, but with strong stems that usually don’t require staking – the plant bears large branching spikes of lilac-mauve flowers in mid to late summer and continue into early fall.

The flowers arch gracefully at the tips – they look a bit like mermaid’s tails – and make good cut flowers. Also attractive to butterflies, and deer-resistant. Adaptable to most soils; grow in full sun. 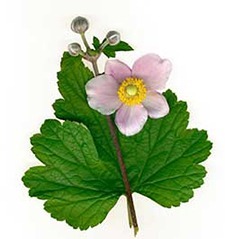 If you have a sunny garden, ornamental grasses are another great way to extend the season of interest into the late fall. Look for well-behaved clump-forming perennial types. The following are some of my favorites, and they all mix well with fall flowers:

Is fall planting of perennials and trees and shrubs really a good idea?