I grow a lot of big, bold perennials and ornamental grasses, and visitors to my garden often comment on that. Invariably they observe that I have the space and that such plants probably wouldn’t work in smaller gardens.

Well, yes, and no. Big gardens do offer the opportunity to try plants that might hold back the faint of heart, but this doesn’t mean you can’t grow them in a smaller space too.

Using architectural perennials in your garden I like to think that many of my favorite bold perennials would not look at all out of place in a sunny suburban garden, especially on a new lot where young trees and shrubs haven’t yet had time to make their mark.

Your space may not be big, but that doesn’t mean your plants have to be itsy-bitsy. Adding one or two outstanding bold perennials can give your garden the punch that’s missing – even in a small space.

If you’re ready to try some knockout bold perennials, here are three of my favorites.

They’re all easy to care for: I don’t stake or deadhead them, and the only maintenance needed is to cut the dead foliage back after frost in fall or, as I do, in early spring. A well-behaved member of the knotweed family, giant white fleece flower is non-spreading bushy perennial that grows as big as a small shrub – about 4 to 5 feet tall.

In early June it produces large, fluffy, creamy-white flower plumes that stay in bloom to the end of July.

The bloom time is exceptionally long, and then when the white flowers fade, the flower plumes turn a pleasant wheat-like color that echoes the color of the plumes of feather reed grass(Calamagrosis x acutiflora ‘Karl Foerster’), one of my favorite grasses.

Spent flowers that look great means no deadheading – which is another huge plus in my book.

My plants thrive in full sun, but I have one in a shadier spot and it’s a little smaller than the others.

Many sources list its hardiness as Zone 5, but some sources list it as hardy to USDA Zone 3. Giant white fleeceflower starts to grow fairly early in the spring, and so can be hit by late frost, but the plant outgrows any damage very quickly. Still, you might wish to cover it up if an unseasonable frost is in the forecast.

There’s only real drawback to this plant that I’m aware of: if you live in an area plagued by Japanese beetles, you may find that they munch on the leaves and take refuge amongst the flowers. However, the damage to this plant is not nearly as unsightly as it is when the beetles attack roses.

This plant looks messy after the frost kills it back, so it’s one for cutting back in the fall. 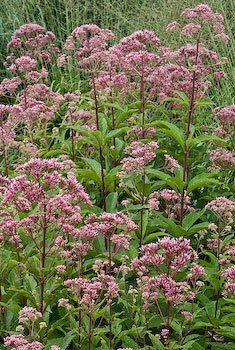 Commonly known as Joe Pye weed, this is another of my favorite bold perennials, though I dislike the “weed” part of its common name.

This is a fabulous North American native perennial, hardy to Zone 4, and not the least bit weedy – I prefer to use its botanical name, Eupatorium, or to call it Joe Pye plant.

Some of my plants are in full sun and others are in part shade and all are thriving. In its native habitat, Eupatorium is usually found in moist, even wet, soils. But the garden cultivars, including ‘Selection’ and ‘Gateway’, do well in average garden soils, as long as the soil doesn’t dry out completely. Rudbeckia nitida ‘Herbstsonne’ (back) and
Rudbeckia ‘Goldsturm’ (foreground) in my garden
Photo: © Y.Cunnington

Hardy to zone 3, this perennial is a giant in the garden. I’ve measured it at almost seven feet tall.

True to its name, in my garden it blooms from late summer into October and is very long-blooming.

Although I have planted this perennial in open windy sites, of the half a dozen ‘Herbstsonne’ plants in two different beds, none has ever needed staking, a job I tend to avoid.

I have it growing in full sun. In part shade it may grow more lax and need staking. It’s said to need good drainage, but appears to thrive in my heavy clay soil.

The flowers are yellow with attractively drooping petals around central green disk and its pinnate leaves give it the common name of cutleaf coneflower. I would class this as a country garden plant that goes well with ornamental grasses and other tough easy-to-grow perennials.

How to plant perennials