Most grasses are drought-tolerant when established, but they need watering for a few weeks after planting, especially in a dry spring.

As far as care goes, all you really have to do is cut them down in early spring.

Cool and warm season types – when to plant 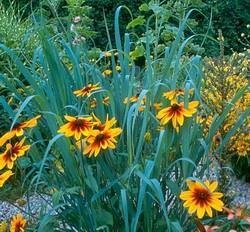 Ornamental grasses can be grouped into cool- or warm-season types, depending on when they do most of their growing.

Cool-season grasses: Like cool season lawn grasses, these ornamental grasses do most of their growing in spring when temperatures are cool and moisture is plentiful.

They start into new growth earlier in spring and tend to flower early, stop growth in the heat of summer, and resume when temperatures cool in early fall.

Warm-season grasses: Warm-season grasses like maiden grass Miscanthus species, switch grass (Panicum species) and fountain grass (Pennisetum species and cultivars) require patience. They’re slow to get growing, but thrive in temperatures from 75° to 85°F (24 to 30C°). Most come into flower in late summer or early fall.

The best way to deal with their spring tardiness is to surround them with tulips or daffodils for spring color before they get growing. Then as the grasses start to grow, they do a nice job of camouflaging the bulb foliage as it dies back. For easy maintenance, choose carefully. The best-behaved ornamental grasses are clump growers, but some are spreaders.

Avoid vigorous spreaders, such as ribbon grass (Phalaris arundinacea ‘Picta’), which can take over.

Unless you plan to use it as a ground cover, confine ribbon grass by planting in a bottomless container about 36 inches deep, sunk into the ground, or plant into a space where spreading will be restricted, for example, between a building foundation and paved walkway.

Grasses are not demanding plants and they’re easy to grow.

Aside from planting them into ordinary soil, and watering for a couple of months when they are getting established, they don’t need coddling – so no added fertilizer or fussing is needed.

To allow for movement and for their distinctive forms to stand out, space ornamental grasses about as far apart as they get tall. For example, fountain grass (Pennisetum alopecuroides ‘Hameln’), shown above, grows about two feet wide and is best planted two feet apart.

It’s best to plant most ornamental grasses in the spring, not the fall, although you can plant cool season grasses in early fall. 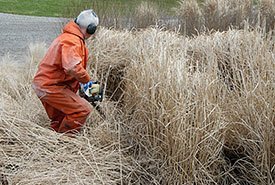 All you need to do is give then an annual haircut once a year in early spring.

Cut them back to within six to 10 inches of the ground. Use hedge shears and wear gloves – some species have very sharp edges.

Cool season: Try to cut down the previous year’s growth of cool season grasses as soon as the snow melts because that’s when they start to grow. If you leave this job too long you could chop off the tips of the leaves.

When cutting these grasses down, leave about one-third of previous year’s growth in place. The new growth will quickly hide the old plant material.

Warm season: You can cut warm-season grasses right down to the ground if you like, but if you are doing the job late, be sure not to cut into the new growing tips. I like to cut these grasses down a little later because I find that the previous season’s buff-colored foliage looks good in with the spring-flowering bulbs.

We have found the most efficient way to cut back the grasses in our large beds is to use a gas-powered hedge trimmer, which we rent for the job.

Dividing grasses – when and how

Some grasses need dividing when they die out at the center.

Usually, division isn’t needed for many seasons, but it’s a good way to get new plants, as grasses tend to be expensive.

Dividing a large mature grass plant is demanding: you need a strong back, a sturdy spade and an axe to chop clumps apart.

Back to Ornamental Grasses