If the thought of dividing perennials, digging up some of your favorite plants and cutting them into smaller pieces, makes you nervous, you’re not alone.

After growing for several years, some perennials die back or get old and woody in the middle and have fewer flowers. By dividing, you’re giving the plant a facelift. Often you’ll see a donut, a dead spot in the middle and active growth around the outside, a sign that the plant needs to be divided.

Control growth and multiply your plants 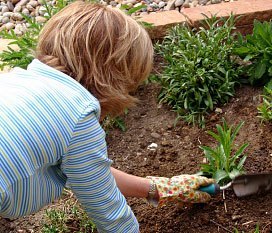 Division is also a good way to control the size of perennial clumps that get too big or outgrow their spots.

Another reason to divide is to multiply your plants.

One perennial clump can be separated into four or five new plants, allowing for bigger groupings and more design punch.

If you don’t need them all, you can give divisions away or trade plants with friends and neighbors.

You can divide perennials in early spring or early fall. The general rule is to divide plants that bloom in mid- to late summer, such as Shasta daisies, in the spring, and early-season bloomers, such as creeping phlox in the fall.

Some early-spring bloomers are best divided right after they flower so they’ll reestablish strongly enough to flower again the following spring. These include creeping phlox, Jacob’s ladder, pulmonaria, primrose and rock cress.

Many gardeners divide perennials in spring. You gain an entire season of growth and have stronger plants before winter comes. When you have well-rooted plants, there’s less chance of winter frost heave – frost literally pushing newly planted perennials out of the ground.

If you’re dividing perennials in the spring, do it when top growth is two to three inches tall. The best time to divide ornamental grasses is in the spring while they are still dormant. (Many won’t survive fall division.)

If you’re dividing plants in the fall, do it early enough to allow for six to eight weeks of root growth before a hard frost. Before digging plants up, cut their foliage back to within two to three inches of the ground.

Add a layer of mulch around newly planted divisions just before freeze-up to help keep soil temperatures even and minimize potential frost heave.

No matter when you divide perennials, for fastest re-establishment, make big divisions with lots of good roots.

How to divide and care for ornamental grasses

Go from Dividing Perennials back to Perennial Care