Black tulips exist only in the imagination. In literature, for example, the quest for a dark-hued tulip figures in the 1850 novel, The Black Tulip by Alexander Dumas.

In this tale of love, murder and greed, the hero Cornelius Van Baerle grows a unique jet-black tulip that is stolen by a malevolent neighbor. Much deadly intrigue follows, and Van Baerle is jailed. Then as execution looms, he is saved just in time.

Gardeners lust after the unusual 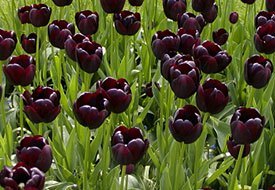 Flowers such as black tulips that are rare, even impossible, in nature have undoubted appeal.

For trendsetters, there’s cachet in creating ‘dramatic’ rather than merely ‘pretty’ effects in the garden.

Dark colors have sumptuous appeal, as color experts Sandra and Nori Pope, who gardened for a number of years at famed Hadspen House Garden in England, attest.

In their book, Color in the Garden, the Popes observe that unlike brighter colors, which reflect light, shades like deep plum absorb light, drawing us into “an atmosphere of mysterious opulence.” 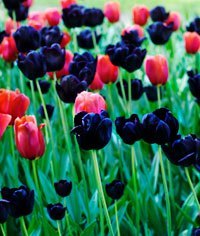 The most popular cultivars are ‘Black Parrot’, a parrot type with deep purple feathered petals, introduced in 1937, and the single late-flowering ‘Queen of Night’, a velvety maroon, still said to be the darkest tulip available. It made its debut in 1944.

Black Hero, is a double late tulip in deep wine, almost black, red; several catalogues refer to it as the double ‘Queen of Night’.

At Hadspen Garden, for example, the Popes combined ‘Queen of Night’ tulips with the silver-gray foliage of Artemisia ludoviciana ‘Valerie Finnis’ and the bronze foliage of emerging peonies to create a rich tapestry.

You can also try pairing ‘Black Parrot’ tulip with white bleeding heart. It also goes well with the chartreuse-flowering perennial, cushion spurge (Euphorbia polychroma), which blooms at the same time.

Both combinations are terrific and all three can even be grown together. Of course, ‘Black Parrot’ tulip also goes splendidly with its white counterpart, ‘White Parrot’.

Another attractive combo – billed “stunning sophisticates” in one bulb catalogue – is pairing ‘Queen of Night’ with the lily-flowered tulip, ‘White Triumphator’.

For another exotic late-blooming combination try the lily-flowered tulip ‘Burgundy’, a deep purplish violet, with its luminous orange counterpart ‘Ballerina’.

When
in fall to plant bulbs? Hint: not too early

Bulb
planting: How and where to plant, squirrel solutions

Designing
with spring bulbs: How to get more bang from your buck

Go from Black Tulips to Planting and Care tips for Tulips