Amaryllis, also known as Hippeastrum, is about the most impressive flowering bulb you can grow as a houseplant. The flowers are large and trumpet-shaped and come in lovely shades.

Colors range from white and apple- blossom pink to scarlet; some varieties even have striped petals.

Amaryllis bulbs are easy to grow 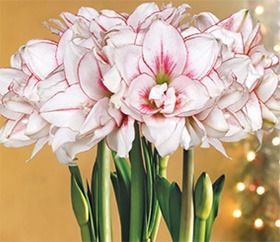 Hippeastrum flowers may look exotic, but they are easy to grow.

When you buy a bulb, look for a large, plump one with some roots attached.

Choose a pot that’s slightly larger than the bulb, and plant into potting soil, leaving the “shoulders” (the top third of the bulb) exposed.

Keep the soil mix moist, but not wet, and temperatures above 64ºF (18ºC). Optimal temperatures are between 68 to 77ºF (20 to 25ºC). Place the bulb in bright light and watch for growth to resume. You should see a flower bud appear after a couple of weeks.

Turn your pot regularly so the flower stalk won’t lean in one direction. The flowers can be quite top-heavy, so you might need give them added support with a slim stake and raffia ties.

The technique recommended for years has been growing the plants on through the summer outdoors, and then inducing dormancy by stopping watering in the fall and placing them in a dry cool spot indoors for 10 to 12 weeks.

The reason for this is to try force blooming for a specific period, usually Christmas. However, for bigger, healthier plants, some experts recommend allowing the bulb to continue growing vigorously as long as possible, so it will reward you with better blooms in January or February.

How to care for Christmas plants

Go from Amaryllis back to Flowering Bulbs